The Ohio State University, tobacco free inside and out.
Skip to main content
Menu

COLUMBUS, Ohio – The Ohio State University has received an $18.7 million federal grant to establish a research center devoted to the study of tobacco use patterns, industry marketing practices and public perceptions that will help the Food and Drug Administration put science behind its new role in regulating tobacco.

Ohio State’s center is one of 14 established nationally under this new federal initiative, called the Tobacco Centers of Regulatory Science program. The National Institutes of Health and FDA announced today that they have teamed to ensure that the FDA’s regulation of tobacco is based on sound and relevant scientific evidence. The National Cancer Institute will administer the Ohio State funding.

The university has proposed a broad research program that takes into account the biological, psychological, economic and public health implications associated with tobacco use and the industry’s marketing of products to consumers. A total of 18 scientists from six colleges and the Comprehensive Cancer Center (OSUCCC) will populate the new Ohio State University Center of Excellence in Regulatory Tobacco Science (CERTS).

Specifically, Ohio State’s aims are to reduce addiction and shed light on health problems arising from tobacco use among youths and adults in rural and urban settings, and to decrease tobacco-related harm by studying individual disease risk and the prevalence of product use – with a focus on dual use and especially new and emerging tobacco products.

Individual studies will assess the prevalence of smoking, smokeless tobacco and simultaneous use of these products; document carcinogen exposure and the genetics behind developing a taste for tobacco and nicotine dependence; analyze purchasing behavior and marketing practices in various environments; and explore the decision-making factors that lead people to choose to use tobacco in the first place.

Tobacco continues to be the leading cause of preventable death and disease in the United States, according to the NIH. With the FDA gaining regulatory authority over tobacco after the 2009 passage of the Family Smoking Prevention and Tobacco Control Act, the agencies say they are partnering to protect public health through science-based regulation.

“There is tension between what the tobacco industry knows about its products and what it’s been sharing with the public, especially with regard to the public’s health,” said Mary Ellen Wewers, professor of health behavior and health promotion and a principal investigator on the grant.

“This initiative is a call to investigators all over the country to promote and accelerate the accumulation of the scientific evidence that will be needed to regulate tobacco. The research will move more quickly by having multiple centers collecting and analyzing data and with the synergy between all of the funded centers as we tackle trying to understand and provide evidence about tobacco products.”

Wewers, a tobacco cessation researcher, is co-leading the center with oncologist Peter Shields, deputy director of the OSUCCC and a specialist in identifying biomarkers to assess lifestyle-related cancer risk factors.

The increasing dual use of cigarettes and smokeless tobacco in particular has ramped up the need for scientific investigation of these products’ effects, Shields said.

“There are concerns that people using both types of products will increase carcinogen exposure,” he said. “And there’s the question of whether the use of smokeless tobacco will make it harder for people who had decided to quit to actually quit. Smokeless tobaccos are manufactured in different flavors, which may encourage children to use these products and end up being smokers.

“There are really important questions about how these products are regulated and what tobacco companies are allowed to put into them.”

Ohio State, with its 14 colleges, is particularly well-positioned to propose the required multidisciplinary research approach to one of the country’s most pressing public health problems, said Caroline Whitacre, vice president for research.

“The researchers in six colleges who are looking at tobacco from multiple perspectives are clearly a tremendous asset to a federal initiative of this magnitude. This critical mass of scientists makes Ohio State a natural place for a comprehensive investigation of the diverse issues related to tobacco use,” Whitacre said.

Added Michael Caligiuri, director of the OSUCCC and CEO of the James Cancer Hospital and Solove Research Institute, “Tobacco remains a substantial public health problem, increasing risks for cancers and other health conditions. We can never do enough to support the FDA in its important task to regulate tobacco products. The center at Ohio State is a great example of our commitment to this by providing high-quality and impactful research.”

“The funders wanted something where the total was going to be much more than the sum of its parts, and that’s what we have developed,” he said.

The colleges populating the center are public health, medicine, arts and sciences, and nursing, the Moritz College of Law and Fisher College of Business. Investigators from four other institutions will also participate: the universities of Kentucky and Pennsylvania, RTI International in North Carolina and Columbus-based Strategic Research Group.

Federal funding for the 14 new centers totals $53 million in the first year and a potential total of more than $273 million over the next five years. Ohio State’s grant covers five years, with the first year of funding totaling almost $3.7 million.

“We don’t know what the future holds in terms of extended funding, but because this is such an important topic, researchers and scientists at Ohio State are committed to keeping this project going,” Wewers said.

More information about the federal initiative is online here: http://prevention.nih.gov/tobacco/tcors.aspx 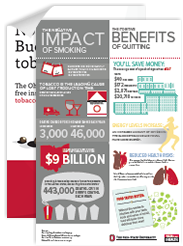